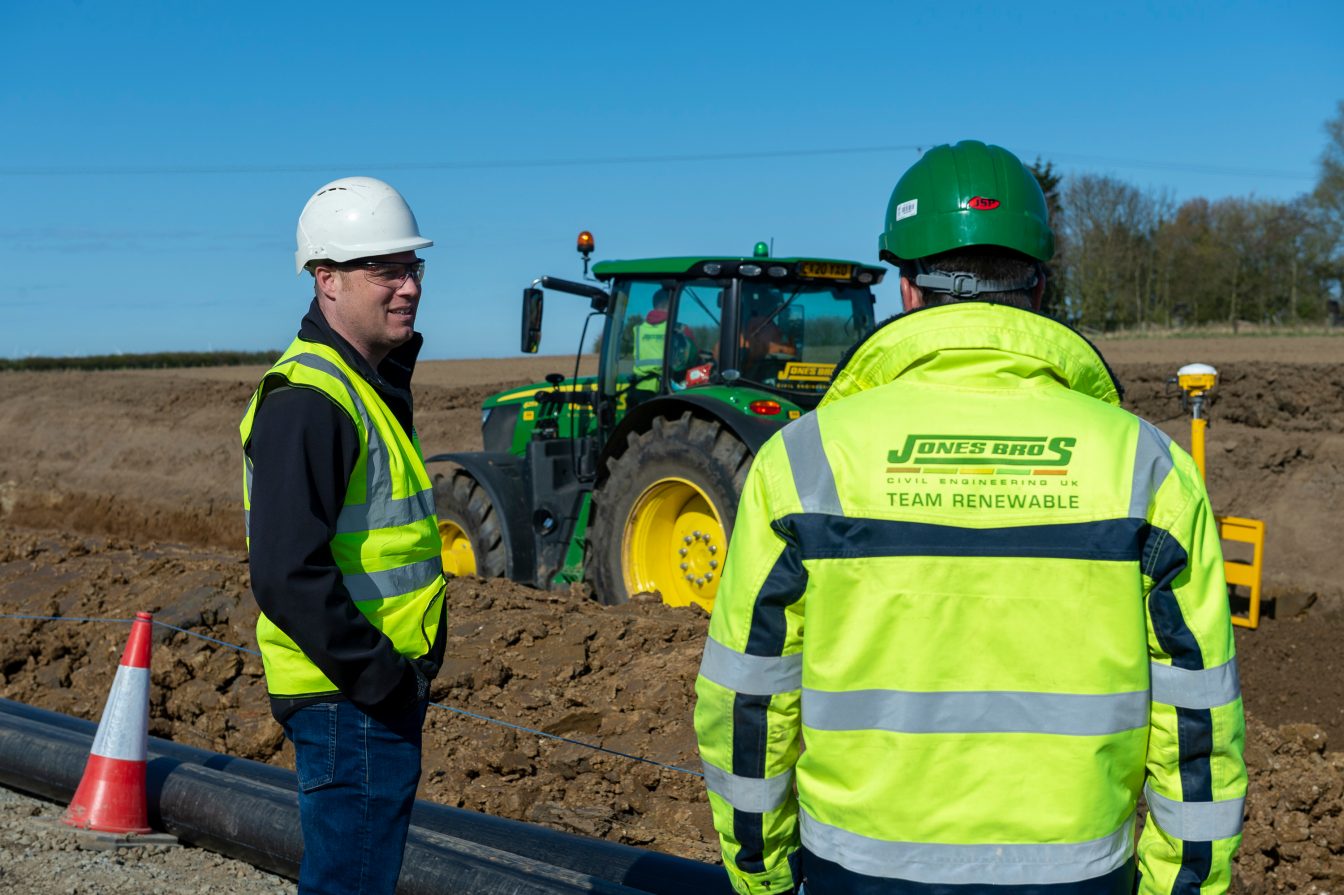 Three quarters of the ducts and a third of the on-shore high voltage cables that will connect the first phases of the world’s largest offshore wind farm to the UK’s National Grid have now been installed.

Jones Bros Civil Engineering UK is delivering the land-based infrastructure for the first two phases of Dogger Bank Wind Farm, which will connect to the National Grid near Beverley, East Riding. There are also a number of UK-based specialists supporting the Jones Bros team with the cable installation work.

The North Wales-headquartered company is responsible for installing 80 miles of underground cabling in underground ducts on land in East Riding of Yorkshire from the landfall site at Ulrome, to the onshore convertor station near Beverley.

With wetter weather now closing in, much of the site is entering a winter shutdown in order to preserve the quality of the soil. However, some drilling work will continue into the new year under the A1079 north of Woodmansey, and at the Creyke Beck Substation, with the tier one contractor planning to complete this by Spring 2022.

“Great progress has been made over the last few years to prepare the land-based infrastructure for the first two phases of the world’s largest offshore wind farm.

“We remain committed to operating safely, sustainably and respectfully as we continue our drilling work in East Riding of Yorkshire, and as duct and cable installation work picks up again in the Spring.”

“We have made excellent progress while the weather has been with us, and as such have installed a significant amount of cable.

“Additionally, we have been able to start some works restoring parts of the site, a process which includes sowing a mix of specially selected cover crops that will help maintain the nutrient levels in the soil in preparation of the final reinstatements work due to carried out next year.

“Once better weather returns in the spring, we’ll be back underway with high voltage duct and cable installation, working towards a final site handover in June 2023.”

The team has also constructed 28 of the project’s 74 joint bays, which will form part of the infrastructure for the connection between offshore power cables and the mains grid.

Dogger Bank Wind Farm, which is being built more than 130km off the Yorkshire coast in the North Sea, is currently being developed in three 1.2GW phases: Dogger Bank A, B and C.

As well as being designed by @WoodThilsted we're proud to say there are now a number of #uk firms involved in the #supplychain for these immense foundations including Metec UK, Granada Material Handling and @TataSteelUK

This week the first platforms were shipped to the Smulders Hoboken yard to be assembled on the transition pieces for our world-leading project.
Our impressive UK-designed foundations are among the largest to be installed on an offshore wind farm.
@sserenewables @Equinor_UK @eni

We’re working with @NOFLimited again in 2022 to deliver a series of events to prepare the #supplychain for opportunities during the #operations and #maintenance phase of the project!