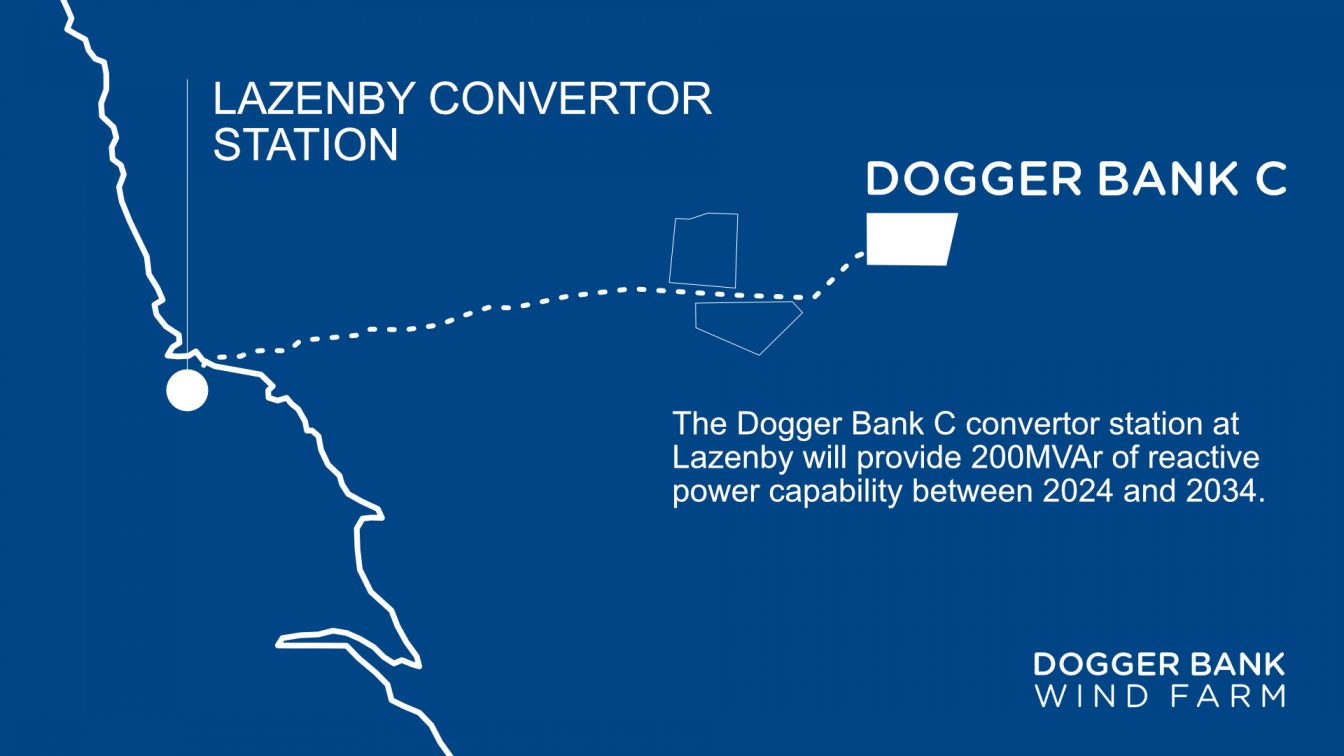 Located off the north-east coast of England, Dogger Bank Wind Farm is being built in three 1.2GW phases and will be the largest offshore wind farm in the world when operational, with an overall capacity of 3.6GW. Dogger Bank C, which won a CfD in the 2019 auction, is around 560km² in size and at its closest point is 196km from shore. The third phase of the project is being developed on a different timescale to the first two phases, Dogger Bank A and B, which are being constructed at the same time. Dogger Bank C will connect to the national grid at the existing Lackenby Substation in Teesside.

Under new £22.5m Pennines Voltage Pathfinder contracts announced today, National Grid ESO has awarded a 10-year power contract to Dogger Bank C that will see its onshore converter station at Lazenby in the North-East of England provide 200 MVAr* of reactive power capability between 2024 and 2034. This marks the first time that an offshore wind transmission asset has been awarded a contract through a reactive power tender by National Grid ESO.

As Britain’s system operator, National Grid ESO has an obligation to ensure voltage is managed within strict guidelines to ensure the safe and secure provision of electricity to consumers and businesses. Reactive power capability is vital for managing voltage and being able to operate a zero-carbon system of the future.

Under its Pennines Voltage Pathfinder programme, National Grid ESO identified the need for reactive power solutions to be provided in the years ahead in the North-East of England following the expected closure of Hartlepool nuclear power station in March 2024.

Following a competitive process to ensure the most cost-effective services are selected, Dogger Bank C wind farm’s offshore transmission asset has been selected to provide the reactive power capability needed to help stabilise voltage on the grid for ten years from 2024.  The award of the reactive power contract to Dogger Bank C’s planned offshore transmission asset has the added benefit of eliminating the need to develop new grid solutions in the region to provide this service, thereby averting the construction of additional energy infrastructure and so reducing visual impact on coastal communities in line with a key aim of the Offshore Transmission Network Review.

SSE Renewables, which is leading on the construction of Dogger Bank Wind Farm, is due to commence onshore construction works for the offshore transmission asset later this summer.

“Dogger Bank Wind Farm is continually pushing the boundaries of what can be achieved through the delivery of an offshore wind farm, breaking records and setting new milestones here in the UK and globally.

“Today’s announcement that Dogger Bank C will become the first UK offshore wind farm to use the functionality of its offshore transmission assets to support National Grid ESO in balancing the network at the lowest cost is further proof of the outstanding innovation that our Dogger Bank team continually strives to deliver. It also demonstrates the significant positive impact that offshore wind energy, and Dogger Bank in particular, is having on delivering the UK’s net zero carbon electricity system while driving down long-term energy costs for British consumers.”

“These services take us another step closer to 100% zero carbon operation, showcasing Britain’s innovation in engineering and driving competition within the system, ultimately saving consumers millions of pounds.

“Reactive power capability is vital for managing voltage and being able to operate a zero carbon system of the future so we’re excited to see that an offshore wind farm’s transmission asset will deliver reactive power to support the wider network for the first time in Britain.”

Dogger Bank Wind Farm is located more than 130km off the north-east coast of England and is being delivered by joint venture partners SSE Renewables, Equinor and Eni. SSE Renewables is leading on construction and delivery while Equinor will operate the wind farm on completion. Due to its size and scale, Dogger Bank is being built in three consecutive 1.2GW phases; Dogger Bank A, Dogger Bank B and Dogger Bank C. In total the wind farm is expected to generate enough renewable electricity to supply 5% of the UK’s demand, equivalent to powering six million homes.