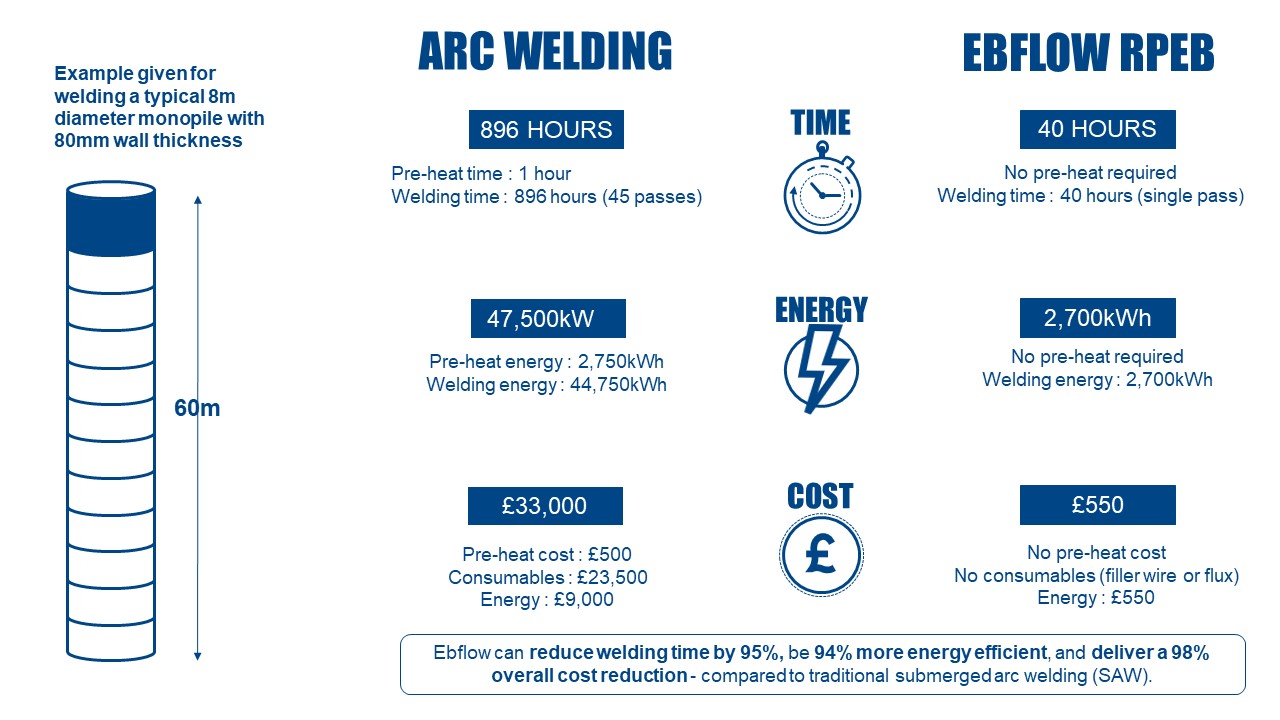 The developers of the world’s largest offshore wind farm will carry out the first large-scale pilot of an innovative new process that will reduce welding times by as much as 80%.

Ebflow Reduced Pressure Electron Beam (RPEB) welding is expected to be used at the Dogger Bank A phase of the wind farm, to fabricate welds on offshore wind foundation monopiles, reducing the amount of time it takes to  carry out the task from a number of hours to a matter of minutes. It will be the first time RPEB has been used on a large-scale offshore infrastructure project and has come about as part of a collaborative partnership named RapidWeld.

The Rapidweld project aims to create an industry-approved weld process for offshore wind which is more productive and sustainable than established methods, while reducing energy and material costs significantly.

The Ebflow technique will streamline the fabrication process for offshore wind farms, further increasing the efficiency of large-scale projects and demonstrating increased cost-effectiveness of renewable energy for consumers.

Ebflow RPEB will also reduce the carbon emissions associated with the traditional welding methods by 90 percent.*

“This is a ‘first-in-class’ project, establishing this UK innovation as world-leading technology. With monopile type foundations accounting for over 90% of foundations used in UK projects, Ebflow RPEB could realise significant cost savings on future projects.

“These substantial savings will not only benefit the UK offshore engineering industry but could be passed on to UK energy consumers.

“It’s exciting that Ebflow is being used at Dogger Bank – a project which continues to contribute to the UK economy by creating jobs and supporting the supply chain. No doubt, other offshore projects across the world could ultimately benefit from what the Rapidweld partnership achieves.”

The project has been made possible with a smart grant of £600k from Innovate UK, which is part of the UK Government backed Research and Innovation organisation.

Sif will be responsible for the fabrication and supply of 190 monopiles and primary steel for the transition pieces, as well as for the marshalling of all foundation components for the first two phases of Dogger Bank Wind Farm.

“We see great potential in the Ebflow RPEB welding process for thick section welding. Reduced distortion and elimination of filler material are, amongst others, great advantages. We are very pleased to have the opportunity to contribute to this innovative project that is joining forces and expertise to create new cost-effective production methods.”

Ebflow RPEB uses heat generated by a beam of high-energy electrons to make a high strength and durable welded steel join in a clean and efficient way.

The Rapidweld project is expected to develop methods which outstrip existing welding technology and reduce the costs of future offshore wind foundation monopiles by up to 20%.