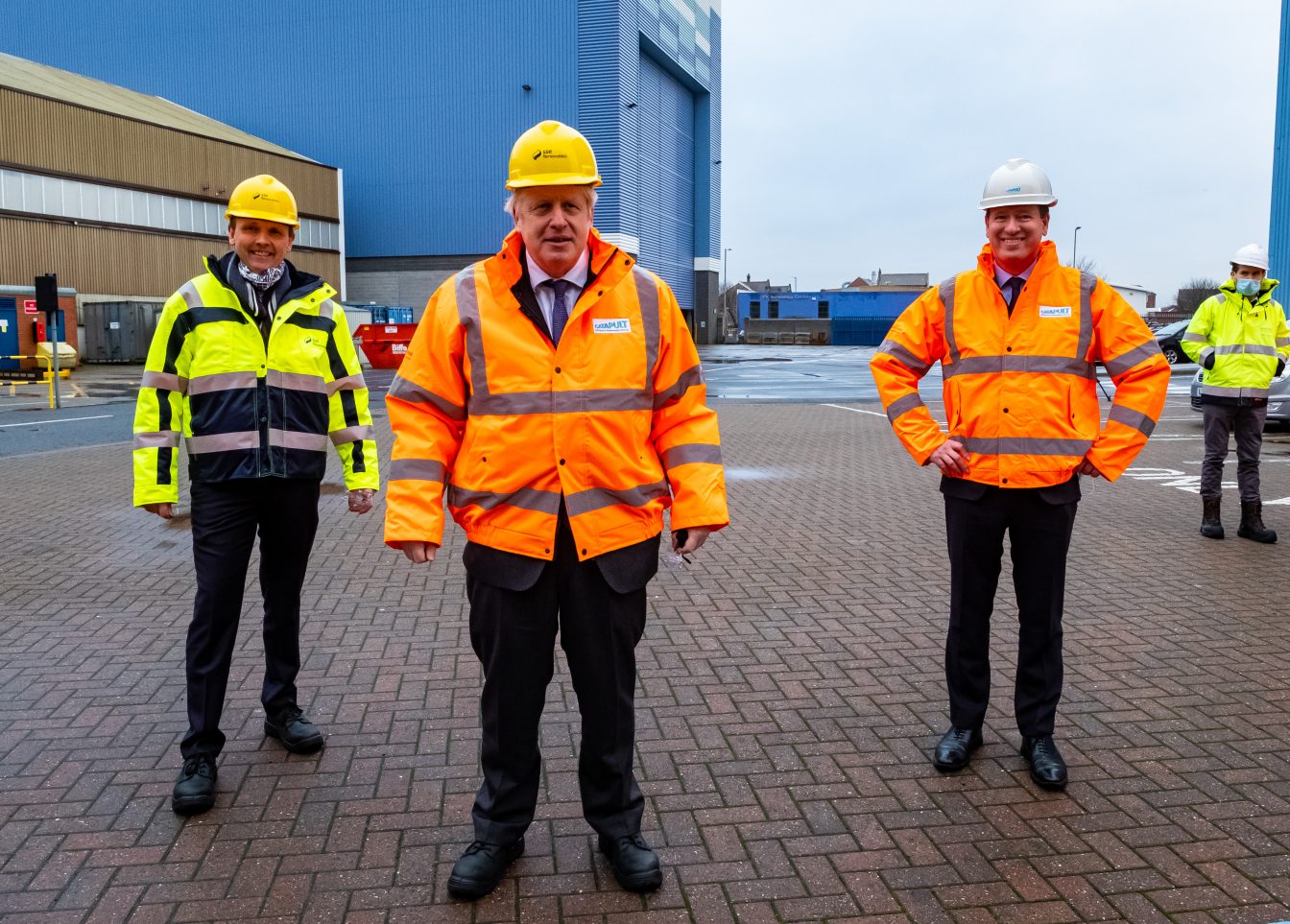 The UK Prime Minister has today praised the team behind the Dogger Bank Wind Farm for the role it’s playing in bringing jobs and investment to the north of England, while driving a green economic recovery.

It will be the first project to use the largest commercially available turbine in the world, GE Renewable Energy’s 13MW Haliade-X, and due to its distance from shore, the first UK High Voltage Direct Current connected wind farm.

In a visit to the ORE Catapult, in Blyth, Northumberland, the Prime Minister said Dogger Bank Wind Farm would bring high quality jobs and investment and drive economic recovery. With a focus on skills and opportunities for young people he said the site was central to the UK’s power future, generating jobs and growth for years to come.

When fully completed in 2026, each phase of Dogger Bank Wind Farm will be able to produce 6TWh of renewable electricity, totalling 18TWh annually – enough to supply around 5% of the UK’s demand and equivalent to powering six million UK homes each year.

ORE Catapult’s world-leading facility is currently testing GE’s record-breaking turbine, ahead of its installation on Dogger Bank Wind Farm. SSE Renewables and Equinor will install 190 of the innovative turbines in the first two phases of the development.

Dogger Bank Wind Farm Project Director, Steve Wilson, said: “Dogger Bank Wind Farm demonstrates innovation and ambition never before seen in the offshore wind industry, using the world’s most powerful wind turbines in operation, GE’s 13MW Haliade-X. To have this recognised by the UK Prime Minister is a tremendous boost for our highly-skilled team, who’ve worked so hard during the pandemic to keep the project on track to supply more than 6 million UK homes from 2026.

“ORE Catapult’s Blyth testing facility is playing a critically important role in the development of Dogger Bank Wind Farm. The Prime Minister was visibly impressed with the expertise he encountered there, as well as the scale of GE’s giant turbine blades and nacelles.

“The Prime Minister clearly recognises the importance of our project in the green economic recovery of the UK, as we create the jobs that will boost the economy and the renewable energy that will significantly contribute to his net zero targets in our post-COVID world.”

Chief Executive of the Offshore Renewable Energy Catapult, Andrew Jamieson, said “Through our collaboration with GE Renewable Energy and LM Wind Power, the Catapult’s world leading test and validation facilities in Blyth are pivotal to delivering Haliade-X, the world’s leading offshore wind turbine, to Dogger Bank Wind Farm. As importantly, they are also at the heart of an extensive programme of UK academic research and innovation, supporting the growth of the UK supply chain and SMEs delivering the vital technologies to meet our net zero commitments and fuel the green economic recovery.

Olivier Fontan, CEO of LM Wind Power, which is part of GE Renewable Energy, said: “It was a pleasure to show the Prime Minister GE’s world-leading Haliade-X, the world’s largest offshore wind turbine in operation today. The perfect technology for the world’s largest offshore wind farm at Dogger Bank. A single sweep of the Haliade-X blades will be able to power the average UK household for more than two days. Testing a blade of this size and complexity, at the ORE Catapult in Blyth, is a tremendous technological achievement.”